So, who else here watches Agents of S.H.I.E.L.D.? I’ve been following the show since the pilot and though it’s had its ups and downs, it’s recently started picking up speed. Last week’s episode (“End of the Beginning”) had some subtle references to the Captain America: The Winter Soldier movie. I had DVR’d last week’s AoS as I always do. (I’m ashamed to admit that I often forget when it comes on and watch it half an hour or so later than live off DVR) I saw Capt. America this past Friday. LOVED IT! So Friday night I watched Agents of S.H.I.E.L.D.

Enter: fangirl squeeing because I picked up on the Capt. America tie-ins. LOL

So, Tuesday night, I happened to notice that it was almost time for Agents of S.H.I.E.L.D. to air. Hooray for me for noticing, right? So I watch, and “Turn, Turn, Turn” is a FANTASTIC episode … and it ties directly into events from Winter Soldier! I freak out on Twitter, Facebook, and in ventrillo (to my Aion friends).

Side note: you MUST go see the movie before watching “Turn, Turn, Turn” — it has spoilers!

So yesterday, geeky friends are still abuzz with news of the movie and tv show intertwining. I get a response to one of my freak out tweets: 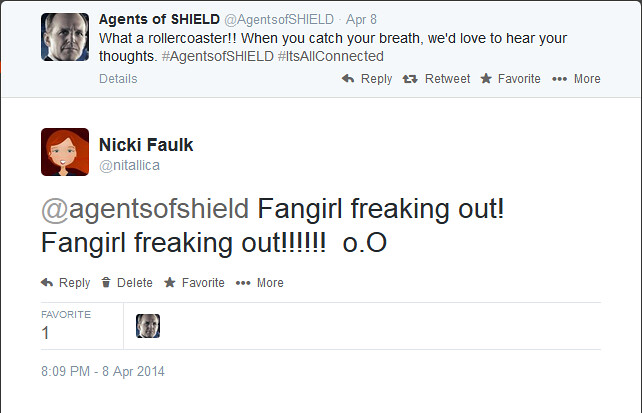 I of course gave them permission to use the Tweet. It was a funny moment. :)

So, if you are a Marvel universe fan, go watch the movie if you haven’t already! And if you aren’t following the show, now might be a good time to start. ;)