Wow, the last month has just flown by. It seems like only yesterday was Christmas. The last two weeks have been especially busy for me. I had every intention of posting this last weekend, but Life had other plans for me. :) 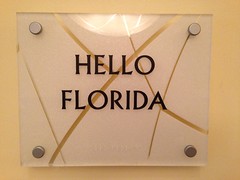 So, early in the a.m. last Sunday, I flew from Birmingham to Orlando for my very first IBM Connect conference (formerly known as Lotusphere). I was a little disappointed in the weather down there. It rained most of the time, but hey, I’ll take 60 degrees over 15 any day! I was peeling off layers of clothing as soon as the plane touched down in Orlando, much to the amusement of a lady sitting near me on the plane.

We stayed at the Walt Disney World Dolphin resort, which was pretty nice. Pretty much all of the conference was contained in the Dolphin and adjoined Swan next door, so getting back and forth to things wasn’t as much of a hassle as I’ve seen in other software conferences over the years. My team had been telling me about this event ever since I started working for IBML, so I was very excited to be there. Seriously, I was tickled to bits to just be among a throng of other geeks, so I was in high spirits.

Granted, most attendees have been using Domino and other IBM products for many years. And I’ve been working with Domino for not quite 4 months now. LOL, the last time I worked with any Lotus product before IBML was when Lotus 1-2-3 had just came out. (for those who don’t know when that was, it was a very VERY long time ago … ’nuff said ;)) 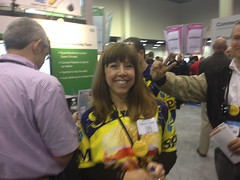 So, my newbie self went to some sessions, was bombarded with new stuff that I have to learn, and was reminded that even though I’ve learned a lot over the last few months, I. Still. Don’t. Know. SHIT! But I had a good time regardless. I met several IBMers who I’ve been following via blogs and Twitter, gotten to know a few of the IBM developers and support staff, and met some IBM partners and other vendors with interesting solutions to various problems I’ve been tasked with at work.

And even though I had a good time, I still worried about those back home. We had all been following the weather situation via tv, phones, and tablets. I called Jessie often to check on her. Thankfully she was not one of the many kids stuck at school when the freeze event happened, but I know plenty of people who were stuck at school, work, or out on the road somewhere.

I’m happy to report everyone’s OK. When I flew home last Thursday morning, I could still see plenty of ice and snow from the air. The drive from the airport to home was an adventure, as much of the rural parts of Birmingham’s metro area were still frozen. But I made it home in one piece, to be greeted by a very anxious Bruce. Luckily Jessie had been able to check on him for me in my absence so he was well fed and watered, and had some company from time to time.

I took a few pictures and shared them on Flickr. Next time I will keep my camera on me, it takes much better pics than my phone. LOL! I also will pack lighter next year. I took a LOT of stuff that I ended up not needed. I have a tendency to over-prepare, and now that I know what to expect I can better plan for next year (I’ve already started next year’s packing checklist).

This week has been hectic due to playing catchup on all the things I missed from last week, plus trying to investigate new things to get installed/working that we learned about at IBM Connect. I’m hoping things will slow down enough in the next few weeks so that I can spend more time studying our environment more and looking for things that can be improved upon.

I hope everyone has had a good week. And if you haven’t, at least it’s Friday! :D