It’s funny that because my main character in Aion is named Harleykin, many people assume I’m a biker. Actually, she’s named after one of my favorite Batman characters, Harley Quinn. I like Harleys, but don’t own one. (might be nice … someday) That said, I do LOVE their gear. Especially their boots.

What can I say? I’m a woman and I love shoes — namely BOOTS! :thumbup_tb:

I had a pair many years ago and wore them until the soles literally fell off. Sadly, it ‘s hard to find a good long-lasting pair of boots. Next to some old Doc Martens (a staple in every self-disrespecting goth girl’s wardrobe don’tchaknow!), they were my absolute favorites. Well I decided that it was time to invest in another pair of good boots. My early birthday gifts to myself are the fitness trainer sessions that I mentioned last week and these beauties: 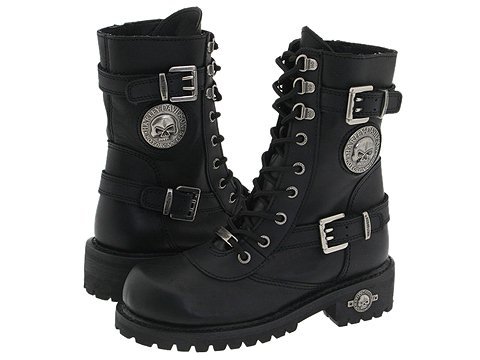 These are a pair of Harley-Davidson “Robyn” riding boots for women. I normally prefer a more ‘military’ style, but once I saw these I was smitten! :happy_tb:

Because none of the local retailers here carried this style, I had to order online. I’ll tell you what — when my package came in, I tore into that box like a 6 year old on Christmas Day! There’s nothing like the smell of new leather. It’s easily one of my favorites! :D

I’ve been wearing these lovelies everywhere trying to get them broken in. So far, so good!

Once some of this weight starts dropping off, I can invest in some ‘skinnier’ (e.g. not ‘hide the fat baggy’) jeans and sport them around properly.

5 Responses to “A pair o’ Harleys”